This easy, foolproof bulgogi is so tender and juicy. You’ll love it. 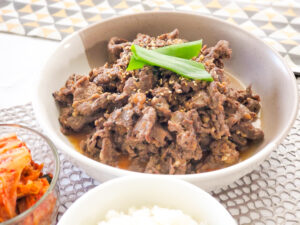 Bulgogi is a staple in Korean cuisine! When my friends who are not familiar with Korean cuisine ask me what they should try, I always say “Start with bulgogi, then I’ll slowly introduce you to the weird stuff, like the fish head stew.”

I haven’t met anyone who doesn’t like bulgogi. I mean, come on, it’s beef marinated in a sweet soy sauce marinade. It goes perfectly with white rice and kimchi. Please do not eat this dish with fried rice. That’s just disrespectful.

This recipe is my mom’s recipe. Cici never measures anything so when I asked her for the recipe she just gave me a list of ingredients. Her instructions were very vague like “mix enough” or “until it becomes salty” One thing she did say was to make sure the soy sauce to sugar ratio is 1:1. I originally thought that was waaaay too much sugar and decided use less. Boy that was a huge mistake. My bulgogi came out bland and too salty. I yelled at myself in my mom’s voice and altered the recipe to keep the 1:1 soy sauce and sugar ratio and yes, it was perfect. I guess my mom knows what she’s doing. Ugh.

Here are the list of the ingredients you’ll need:

5-7 cloves of garlic (about half of a whole garlic)

The ingredients are pretty simple. I visited Chicago over the weekend so I was able to buy ribeye pre-sliced and frozen specifically to make bulgogi. You can ask your butcher to slice it for you or you can freeze the ribeye and use a home deli slicer. You can compare to a thickness of a deli ham. Picture below is to reference how thin the ribeye should be. 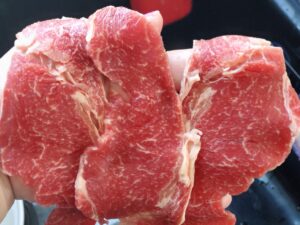 Also, make sure you use an Asian pear (or Fuji apple) in your marinade. Do not skip this! This will ensure your meat is tender and juicy. Look at that pear, it comes individually wrapped in a cute little spongy wrappy thingy. How precious. 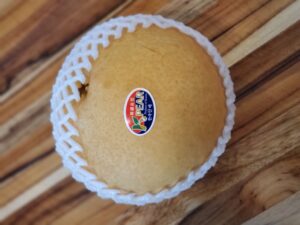 Making the marinade is super easy. Do not buy the pre-made bulgogi marinade from your grocery store. It’s garbage. Trust me. Cici’s marinade will change your life. Throw all the ingredients in the blender (except the meat, duh) and blend it until no chunks of garlic or pear is floating around. Throw the marinade and the ribeye in a large bowl and mix well, making sure each beef slice is coated in the marinade. Let it sit in the fridge covered in plastic wrap for at least 4 hours. Preferably overnight. It should look something like this 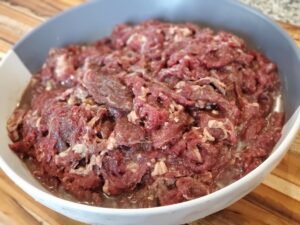 The beef will soak up the glorious marinade and become more brown in color as it sits in the fridge. If you can, mix the meat again about half way through marinating it.

I had my little sister over for dinner and cooked this on a table top Korean BBQ grill. It was so tender and juicy, thanks to the pear. You can also cook this in a frying pan over medium heat. Shouldn’t take you more than 7-8 minutes to cook 2 servings. It’s very thin so it cooks fast. Make sure you don’t cook it on a super high heat because it will caramelize the marinade too fast and burn the beef. When the beef is done cooking, you shouldn’t see any red in the meat but there should be plenty of the meat juices left in the pan. YOU KEEP THAT JUICE AND MIX IT WITH WHITE RICE. IT’S SOOOO GOOOOD. My mom likes to add sliced onions when cooking bulgogi. I made mine without. Both ways are equally delicious. 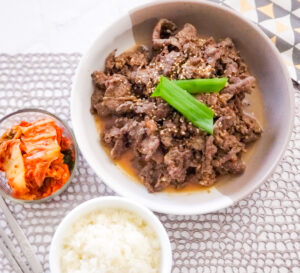 Check out my recipe card below!

1. Marinating overnight is the best.

2. Try to mix the meat again half way through the marinating process

3. Do not overcook the dish! Bulgogi marinade has lots of sugar and it can burn in the pan. There should be plenty of "juice" left in the pan once the meat is done cooking. (Pro tip: After you eat all the big pieces of meat and there are only little bits and mostly juice left, mix it with white rice! Super tasty)

As an Amazon Associate and member of other affiliate programs, I earn from qualifying purchases.

One thought on “Easy Bulgogi”

Who is this weirdo? 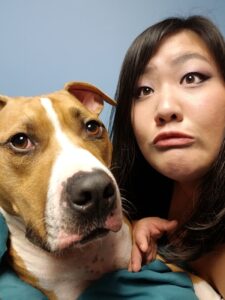 Yoori makes Korean food with everyday ingredients that can easily be found at any local grocery store.

When she is not stuffing her face with Korean food, she works as a board certified family nurse practitioner in southwest Ohio. She loves to spend her free time with her nerdy husband and her adorable rescue pit bull. #adoptdontshop